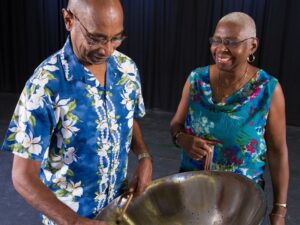 The Winnipeg Steel Orchestra first appeared on Winnipeg’s musical landscape in 1972 as a small ensemble of steel drum or ‘pan’ players. Over the years, it has grown in size, stature, variety of instrumentation, and musical repertoire.

The Winnipeg Steel Orchestra is a non-profit organization existing to promote the appreciation and preservation of Caribbean Steelband music as a contribution to the development of Canada’s culture. Some of its objectives consist of educating its members and the general public about the origins and development of Steelband music, promoting a better understanding between people of the Caribbean and other origins, and acting as an ambassador for the City of Winnipeg and the Province of Manitoba while performing.

This group of music enthusiasts has performed nationally and internationally in Alberta, Saskatchewan, Ontario, North Dakota, Minnesota, Wisconsin and, of course, Manitoba.

For smaller and more intimate events, the orchestra can be reduced to a 4 piece or even a duo.