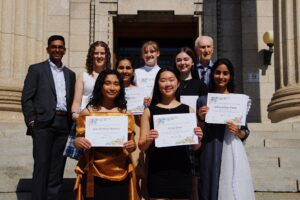 Congratulations to the recipients of the 2021 Mark & Dorothy Danzker Scholarship for Excellence.

MARK & DOROTHY DANZKER SCHOLARSHIP FOR EXCELLENCE
Together with the Jewish Foundation of Manitoba, Folklorama is pleased to present the Mark & Dorothy Danzker Scholarship for Excellence, an annual award of excellence for ethno-cultural heritage preservation. The Scholarship honours the memory of philanthropist and former Winnipeg city councillor Mark Danzker and his wife, Dorothy.

Mark Danzker was born in Poland in 1902. His family immigrated to Canada in 1907, settling in Winkler before moving to Winnipeg in 1911. With his mother’s passing in 1909, his formal education ended and he entered the workforce at the age of 10. The next year he left home to work in a lumber camp and by the age of 16 he bought a pharmacy in Lac du Bonnet. Eventually, he was successful with investments, oil exploration, and development companies, as well as the owner of Danzker Dress Limited, a manufacturers’ wholesale company that saw the Danzkers travelling through western Canada working with many independent shop owners.

While the Danzkers did not have children of their own, they were very active in the community. Dorothy worked for many years supporting the Misericordia Hospital as a volunteer in their gift shop. Mark was particularly active in amateur and professional sports, having brought the minor league team the Winnipeg Goldeyes to the city in 1954. He also played a major role in attracting the Pan-American Games to Winnipeg in 1967. Mark served as a Winnipeg City Alderman from 1960 to 1968 and was awarded the Manitoba Good Citizenship Award in 1974. He was inducted into the Manitoba Order of the Buffalo in 1957 and named a member of the Order of Canada in 1978.

SCHOLARSHIP OVERVIEW
The scholarships include:

ELIGIBILITY
To be eligible for a $1,000 scholarship, the applicant must:

Volunteer in a cultural activity in the general community.

Perform well academically with an average of 75% (3.0 GPA) or better