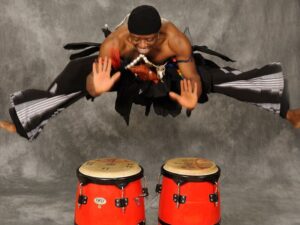 Evans Coffie, also known as Coffieman, is an outstanding performer of the music and dance of West Africa, specifically from Ghana where he participated with the National Dance Company for several years. His performances include Calypso, Reggae and African Highlife styles of music as well as African dance styles based on Mother Africa’s root traditional ethnic backgrounds.

Coffie educates people on how to play, create and establish the rhythms of Africa in easy-to-understand, fun-filled lessons. He demonstrates his collection of African (or talking) drums by playing rhythms of Djembe, Conga, Woyo, Talamandi, Kinasona, Nagala and Highlife styles while he educates the participants of the history behind them.

Coffie performs regularly at conventions, special events and schools throughout Winnipeg. As a member of the Ghana Dance Ensemble, he has performed in Europe, the United States of America, Canada, Russia, the Caribbean, and Africa. Coffie began performing at Folklorama in 1998 at the Africa Pavilion and enjoys coming to the festival every year to perform, and celebrate his culture.