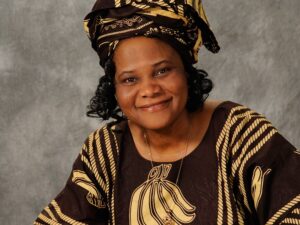 Originally from Nigeria, Bola Oriyomi, has been performing as a one-person act since 1994. Her featured performances include storytelling, singing, theatre, drumming, and dancing. Bola is well versed in African folk tales and traditional culture. She has performed at various locations in Manitoba, Canada and around the globe. With a background in Theatre Arts and a Bachelor of Arts in Education, Yoruba also has a degree in History from the University of Winnipeg. In addition to her solo career, Bola also heads Ariya Africa Cultural Group, a contemporary African dance troupe. Bola’s storytelling has been featured on CBC Radio as well as local Winnipeg TV stations. She currently has two published collections of African folk tales and continues to perform all over the globe sharing traditional African stories, songs, and culture.