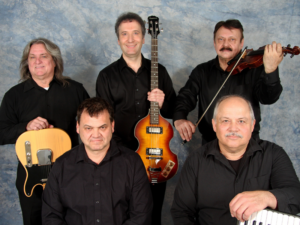 The High Profile Dance Band is the name of a high-powered, fun-filled, professional and versatile 5-piece dance band that has captivated audiences throughout Manitoba and beyond at countless functions for exactly 20 years.  People have even mentioned that they have sore feet after too much dancing to the band’s music!

Founded by Winnipeg musician, Darren Gagaluk, High Profile has performed at such events as the main stage at Canada’s National Ukrainian Festival in Dauphin, Regina Mosaic Festival, Vesna Ukrainian Festival in Saskatoon, Gathering of Nations Festival in Thief River Falls, Minnesota, Ukraine-Kyiv Pavilion at Folklorama, and has been part of the Corydon Avenue Summer Concert series every year for the last 15 years.

The band has been in demand for many weddings and other private and corporate events throughout Winnipeg and Manitoba.  In July 2015, High Profile was the opening act for the 2015 Folklorama Kickoff held at The Forks.

High Profile, although proudly rooted in Ukrainian vocal and instrumental music, plays a variety of music including rock, pop (from the late 1950s to present), swing, country rock, and Celtic.  The band has also recorded three very successful Ukrainian CDs: Traditionally Yours, …And The Zabava Goes On… and Tribute To Ukrainian Heritage all of which feature never before heard danceable arrangements of traditional and popular Ukrainian songs.