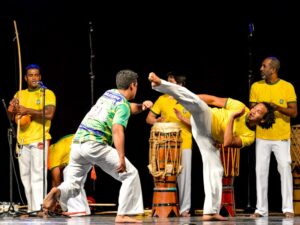 Viva Brasil Canada is a non-profit organization dedicated to the development and preservation of the traditional Brazilian Capoeira in Winnipeg. Capoeira is an Afro-Brazilian martial art developed by slaves in Brazil during the 16th Century. They disguised their movements as a dance in order to be allowed to continue and used the movements to secretly practice art, transmit culture and lift spirits. The result is an energetic, flowing progression of movements with elements of dance, gymnastics and martial arts.

Mestre Índio, a three-time Brazilian Capoeira champion, began Viva Capoeira in 2002 to teach students the movements of Capoeira. He works on improving their fitness while providing them with a Brazilian cultural experience. His involvement in Capoeira encompasses teaching workshops as well as teaching adults at prominent universities across the United States.

Music is integral to Capoeira; the songs are sometimes about life or love lost and others are lighthearted or even sung just for fun. Some of the instruments used are the berimbais, attabaque, pandeiro, agogo, and clapping. The music fills the audience with vibrant beats and rhythms, producing an interactive experience for all who watch. Crowds cannot help but cheer on the performers as their intensity, musicality, and skills progress throughout the performance.