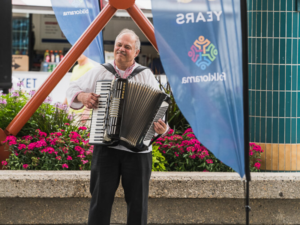 Stephen Kiz is a Winnipeg born accordionist who studied with Ted Komar and Len Hunchak. During his studies, Steve competed in several Canadian and Accordionist and Teachers Guild competitions in Winnipeg, Toronto, St Louis and Chicago bringing home several trophies.

Appearing across western Canada and in the United States of America, Kiz has performed both as a soloist and with various groups for the Folklorama Talent agency.

From 2001 to 2008 he was a rehearsal accordionist and conductor/arranger for the Ukrainian National Federation School of Dance.

Wiz has been involved with Folklorama for over twenty-five years performing at and arranging for such pavilions as Italy/Sicily, Alpine (German/Austrian), Brazil, Kiev (Ukrainian) and most recently, the Spirit of Ukraine pavilion.

Wiz currently leads and arranges for several of his own groups including the BMW (Bavarian Musik Werks) band, the BMW Dixieland Band and the BMW Brass Band. He is also active in several other projects as an arranger and accordionist including the Dennis Nykoliation Band, the High-Profile band and Melos Folk Ensemble. 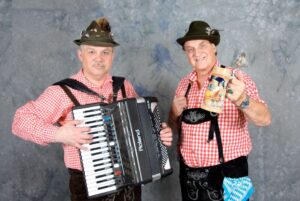 The group is comprised of Stephen Kiz on accordion and vocals as well as Jens Fieting on vocals. Vocalist Jens Fieting has been involved with a variety of Folklorama pavilions over the years. He has performed at the Alpine, German, Majestic Alps (Swiss), Slovenian and Dutch pavilions. During his Folklorama career, Jens has performed as both a percussionist and/or a vocalist with such groups as Edelweiss dance band (German/Dutch), Polenta (Slovenian) and the Polka Dots (German) appearing at multiple pavilions in some years. Jens has been performing with the Bavarian Musik Werks for more than 20 years. Jens sings in German, English, and Italian.