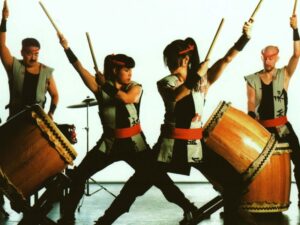 For over twenty years, they have performed at festivals, concert halls, and schools across North America.  They have collaborated with such groups as the Winnipeg Singers, Moses Mayes Family Funk Band, the Northern Plains Ballet, and Ron Paley’s Big Band.

The core members of the group received their formative training from the founder of North American Taiko, Grandmaster Seiichi Tanaka. After performing at Carnegie Hall with the San Francisco Taiko Dojo and leaving with Tanaka’s blessing, they relocated to Winnipeg, Manitoba where they expanded into the current professional touring ensemble.