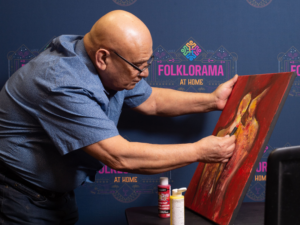 Jorge Figueroa settled in Winnipeg after arriving from El Salvador in the late 1980s. He is an accomplished international artist specializing in painting, drawing, and sculpting. He has studied in Japan and Europe. His international solos and collective exhibitions have been featured all over Latin America, Canada, and the USA. He has delivered and taught numerous workshops and classes throughout the city. For many years, Figueroa has been an active supporter of Folklorama and has volunteered at various Latin American pavilions.