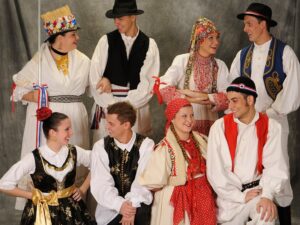 Since its inception in 1972, the Croatian Folklore Ensemble – “Hrvatska Zora” have been entertaining audiences with their energetic and colourful song and dance. With over 70 members, Hrvatska Zora or the English translation “Croatian Dawn” is comprised of a Tamburica Orchestra, Junior, Intermediate, and Senior level dancers, as well as an Alumni group for those performers who still enjoy sharing their love of Croatian folklore.

Croatian Dawn has been fortunate to share its assortment of choreographies and musical repertoire, with audiences on numerous occasions. Folklorama being the mainstay for the ensemble, Croatian Dawn also has performed all over western Canada, numerous local Manitoba performances, and in the United States of America.

Some prominent performances for the ensemble have been at Disney World in Florida, an appearance on the popular children’s educational program “Sesame Street” and more recently at an international folklore festival in Trujillo, Peru, as well as separate shows in Lima, Peru.

Croatian Dawn prides itself on showcasing the beauty and diversity of the Croatian culture. With numerous traditional national costumes (some hand made by the ensemble and others directly from Croatia), a collection of various traditional instruments (played by the Tamburica Orchestra), and the vocal variety in the performances (both acapella and accompanied) the depth and range of the Croatian culture is exceptional.