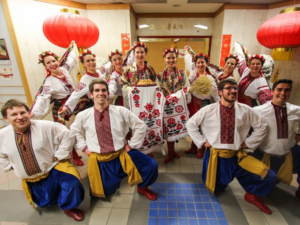 The Romanetz Ukrainian Dance Ensemble is named after a flower that carpets the steppes of Ukraine. This beautiful, yet hardy daisy is the perfect description for a dance group that calls the uncompromising Canadian prairies home!

The group was founded in 1978. The ensemble functions with an “Open Door Policy” which has allowed them a very unique status in Winnipeg. They accept all who are interested in Ukrainian dance without prejudice to ethnic background or dance ability. Rehearsals are always open to new dancers, whether they have danced since childhood or are lacing up their dance shoes for the very first time.

Three common themes unite the members of Romanetz: they are proud of the Ukrainian heritage; they love Ukrainian dance and they have a strong desire to share the culture with the world. With their traditional welcoming dance – Pryvit, demonstrations of sword fighting, regional ensemble numbers, dynamic tambourine dances and the energetic finale of Hopak, this Ensemble will invite you to share in their love of Ukrainian dance. Romanetz is directed and instructed by Tom Mokry.