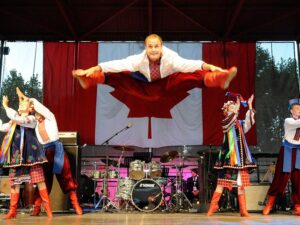 Rozmai Ukrainian Dancers was established in 1971, and will be celebrating 50 years in 2021! The company has successfully reflected Ukrainian culture and tradition in the beauty of the performing art of dance. Their ensemble’s uniqueness is derived from the marriage of the Canadian experience and traditional Ukrainian roots.

Rozmai’s repertoire consists of dances from almost every region in Ukraine and the costumes are reflective of each region. They are absolutely breathtaking.

Audiences everywhere have come to expect top-notch performances from the Rozmai Dance Company and are never disappointed. Presently under the artistic direction of Gabriela Rehak, Rozmai continues to be innovative and astounding in the dance world. Gabriela offers a wealth of knowledge and expertise to the ensemble – from broad, sweeping movements of the Steppes, to the highly acrobatic jumps of the Carpathian region, to the incredibly syncopated rhythms of Bukovyna.

Rozmai’s rich and colourful repertoire is enjoyed both locally and abroad. They perform extensively in their home province of Manitoba as favourites at conventions, concerts, and have performed with distinguished groups such as the Winnipeg Symphony Orchestra, the Royal Winnipeg Ballet in their Swan Lake production, and the Koshetz Choir. Rozmai is always a regular performer at large scale social events such as Folklorama and other Folk Arts Council functions. They have performed in Ontario and North Dakota as well. They have also had the distinct honour of performing for hundreds of thousands of people at the 10th anniversary of Independence of Ukraine in Lviv, the International Folkloric Dance Festival in Peru, and at Canada’s National Ukrainian Festival in Dauphin. As well, they have performed at the Soyuzivka Festival in New York, Disneyland, the 1999 Pan Am Games in Winnipeg, the Aquatennial Festival in Minneapolis, the Winterlude Festival in Ottawa, and several times at the Ukrainian Festival in San Diego’s Balboa Park.

A performance that won’t soon be forgotten…be prepared to be impressed and involved by their wonderful company of dancers!