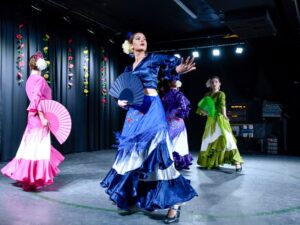 The Spanish Club of Winnipeg Dancers – Sol de España are an exciting, multi-faceted group of dedicated performers. They focus mainly on representing various regions of Spain.

A universal favorite is the fiery flamenco style that makes southern Spain famous. Their presentation is bold and alive with castanets and brilliantly coloured skirts and shawls.

The Spanish Club of Winnipeg Dancers – Sol de España has performed for many occasions at a variety of venues including Spain’s Folk Festival in 1994. They appear as a regular feature at Folklorama’s Spanish Pavilion – Pabellón de España. They have appeared on local television in support of community projects and have had the honour of representing Winnipeg and Manitoba on tourism promotions. Sol De España’s dancers provide brilliant and exciting performances that portray the glamorous culture and brilliance of Spain.