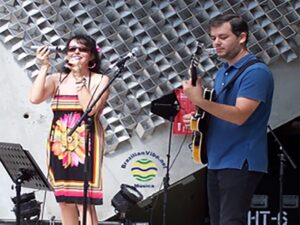 Brazilian Vibe enchants audiences while performing the poetic and vibrant “Samba” and “Bossa Nova” from Brazil. This rich palette of rhythms and graceful melodies will without a doubt transport you to the tropical land of Brazil.

Introducing the members of “Brazilian Vibe” …

A native of Quebec, Guylaina was raised in a passionate, singing family, and was surrounded by classical music throughout her growing years. She started her artistic journey by accompanying herself on the guitar. Subsequently, her fascination with “World Music” brought her to experiment with a variety of cultures. Guylaina sought out ways to express herself through French, Spanish and Italian songs until she discovered her passion for Brazilian music.

Guitarist Marcos Martins has recently made Winnipeg his home bringing with him his musical culture from Rio de Janeiro, Brazil. With his charming interpretations, Marcos will captivate your imagination and take you on a trip to his homeland!

Learning from Brazilian masters in New York, Fabio Ragnelli moved from Toronto to Manitoba to share his expertise in “World Rhythms”. In the summer time, Fabio tours and performs throughout Eastern Canada.

The trio are the perfect synergies between Canada and Brazil. “Brazilian Vibe” brings a fresh interpretation of these irresistible rhythms, while simultaneously revitalizing the classics and introducing us to the newest songs from Brazil in three different languages!