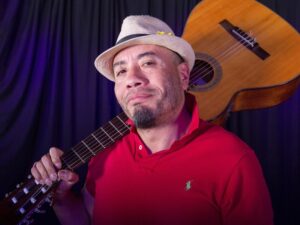 Guitarist, percussionist and bassist, Rodrigo Muñoz is well known around Winnipeg as the band leader of the popular Latin Jazz ensemble, Papa Mambo, which he formed in the late eighties.

As a percussionist, he has had the honour of backing Latin legends, such as Tito Puente and Jose Luis “Changuito” Quintana, and more recently, Canadian jazz stars like Jane Bunnett and Hilario Duran. As a classical musician, he has given solo recitals and accompanied and/or played with numerous ensembles and soloists, such as Alma Petchersky, Camerata Nova, Claire Marchand, Maritel Centurion, the Winnipeg Symphony, the Manitoba Chamber Orchestra, the Winnipeg Jazz Orchestra, the Brandon University Choir, the Winnipeg Philharmonic Choir, and the Winnipeg Contemporary Dancers.

Muñoz has served on music-related juries for The Manitoba Arts Council, The Canada Arts Council, and The Canadian Juno Awards. He also teaches his craft to young musicians throughout the province.

Rodrigo is available as a soloist and in different group configurations.