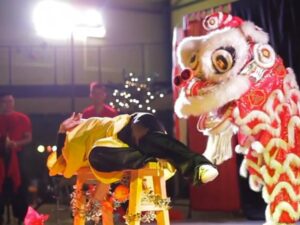 The Flying Lion Dance Troupe is Manitoba’s only authentic Chinese Lion & Dragon Dance team that aims to provide the best in Chinese culture and entertainment.

The Troupe was established by six members in November 2006, all with one thing in common, their dedication towards the Chinese Lion Dance and educating the community about this Chinese tradition. Since then, the team has since grown and evolved to include Dragon Dance with their new glowing Dragon.

Their mission is to promote traditional and modern Chinese Lion & Dragon Dance styles to future generations, contribute to the enrichment of multiculturalism in Manitoba and provide an opportunity for youth to be involved in the preservation of their culture.

The Chinese Lion Dance is a traditional dance done in which two performers mimic a lion’s movements. The Troupe trains on a Lion Dance focused curriculum, which results in their ability to perform traditional floor routines, shows with props and modern competition style performances on poles ranging from three to nine and a half feet.

The Chinese Dragon Dance showcases various movements and acrobatics to tell the story of the Dragon chasing the Pearl of wisdom.  Their colourful dragon glows as it exemplifies its movements performed by a team of 10 members.

The team has performed across Manitoba in varies major festivals, corporate events, and grand openings like the new Outlet Collection Mall.

Bring good luck and prosperity to you and your guest with a Flying Lion experience like no other.