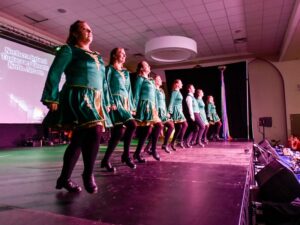 McConnell Dancers are recognized for their high calibre, energetic performances which encompasses both traditional and contemporary forms of Irish Dance.

McConnell Irish Dancers perform at over 60 local and charitable performances each year and have performed at the Olympic Games, Commonwealth Games, and with well-known performers such as “The Irish Rovers”, “Tommy Makem”, and “The Irish Descendants”.