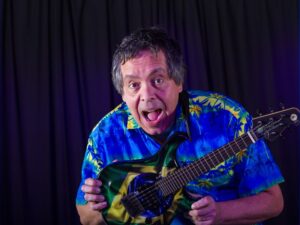 Marco Castillo is a Latin music artist from the Samba capital of the world, Rio de Janeiro, Brazil. Raised in a musical family, Castillo has a Bachelor of Arts in music and is a songwriter, producer and a multi-instrumentalist. Since moving to Winnipeg in 2006, Marco has spread Brazilian music and culture throughout the city with his unique style and flavour of Brazil.

Performing in clubs, festivals and concert halls around the globe, Castillo is well-known in the cultural community as an energetic and inspiring performer. Marco always delivers one of a kind world-class show. He has recorded and toured with many artists before launched his solo career in 2007. Awarded “World recording of the year” for the Western Canadian Music Awards in 2012, nominated in 2014 with 3 full-length CD’s under his belt, in 2015 Castillo was selected to represent Brazil in the International Festival “Viña del Mar” reaching 250 million people world-wide. The song “Forró no Canadá” from Marco’s latest album “Zabelê” was one out of six finalists of the jurors composing Oscar de León and Pedro Aznar. From uncontrollable upbeat infectious Samba-Funk grooves to smooth Latin-Ballads, Marco is the Latin/World Music ‘go to guy’. Castillo has the flexibility to perform as a solo act, in a small ensemble or with his 7-piece band, Brazilian Beats. He is the band leader of the Brazilian Beats Band.