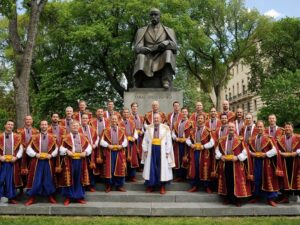 Winnipeg’s Hoosli Ukrainian Male Chorus has been proudly preserving the unique tradition of Ukrainian male choral music for over 50 years. What began in 1969 as the St. Vladimir’s College Alumni Choir has now grown into an internationally renowned chorus with more than 160 men pouring their hearts and souls into Hoosli, passing on the fire and spirit of the Kozaky to this day.

Hoosli has performed all over North America, recorded eight albums, and continue to inspire audiences with the majestic sound of a four-part male harmony.

In 2019, Hoosli celebrated its 50th Anniversary with a series of events and performances that culminated with a Gala Concert at the Centennial Concert Hall. The concert featured 50 years of Hoosli music along with excerpts of the Opera “Taras Bulba”. Guest artists included the Winnipeg Symphony Orchestra, renowned Soprano, Andriana Chuchman, Rusalka, and Accordionist, Myron Kurjewicz. The concert was conducted by Tadeusz Biernacki, with a guest appearance of long-time conductor William Solomon. Hoosli’s music for the concert was scored for the WSO by conductor, Tadeusz Biernacki. The concert was an ambitious undertaking and a great success.

In recent years, the reach of Hoosli’s music has grown to global proportions – between the advent of digital music platforms, and the exposure to international audiences through its anthem performances at Winnipeg Blue Bombers, Winnipeg Goldeyes, and especially Winnipeg Jets games.

Please visit www.hoosli.com to learn more about Hoosli, and check out videos of their performances on their YouTube channel.