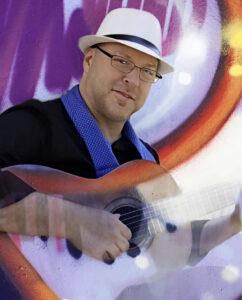 Born in Québec, Philippe Meunier’s guitar has taken him to Spain, the United States, and across Canada. Whether promoting The Barber of Seville & Don Giovanni for the Manitoba Opera or opening for the Picasso exhibition, accompanying Flamenco Dancers, or playing solo, he shares his love for Spanish Music wherever life takes him.

Philippe was awarded a wide range of grants by the Canada Council for the Arts, the Manitoba Arts Council & the Winnipeg Arts Council to pursue his study of Flamenco in Spain. Philippe keeps the audience engaged in this passionate, lively, percussive, and seductive art form which appears on the UNESCO’s list of Intangible Cultural Heritage of Humanity.

He had the privilege to play for distinguished events. For instance, Jazz Winnipeg at the West End Cultural Centre, Harvest Manitoba on CBC Radio, The Trade Commission of Spain at the Winnipeg Wine Festival, The Victoria Flamenco Festival, The Folklorama Inaugural Ceremony, The Children`s Charity of Manitoba Grand Opening, The Canadian Francophone Games & The Winnipeg Fringe Festival, just to name a few.