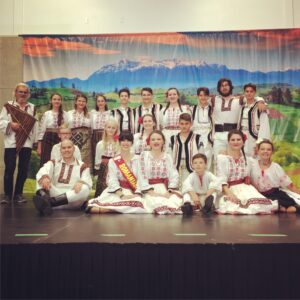 The dancers range in age from 4 – 35, with a roster of over 30 dancers and musicians. Majority of the dancers are of a Romanian background, including many first generation Romanian dancers, but also include second generation Romanians. The group has participated in many different cultural events in Manitoba and Saskatchewan including the St. Elias Orthodox Church’s Anniversary in Lennard, Shell Valley’s 90th anniversary, Polish Fest, and at Mosaic, which is a multicultural festival in Regina.

The Balada Dance Team has created a medley of fan favourite dances which showcase traditional music from different regions of Romania (Moldova, Oltenia, Dobrogea) and intertwines it with Etno songs – which is a twist on traditional and modern sounds.