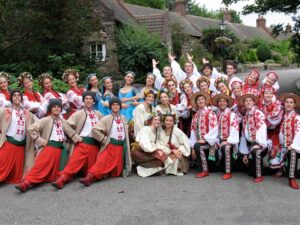 For nearly 60 years, the Rusalka Ukrainian Dance Ensemble has been capturing the imagination of audiences around the world with its often fiery, always colourful presentation of Ukrainian dance. Built on a foundation of discipline, devotion, and camaraderie, Rusalka has become an integral part of the Winnipeg arts community. Rusalka’s rich choreographic repertoire features dances from Ukraine’s diverse regions, styles, and moods to captivate any audience.

It is with ancient Ukrainian folklore in mind that Rusalka’s founder, the late Peter Hladun, brought together a group of promising young dancers in 1962. Hand-picked from the Ukrainian National Federation School of Dance, the eager and dedicated students soon developed into one of the most exciting Ukrainian dance ensembles in Canada.

From its Winnipeg roots, Rusalka has expanded its horizon to reach out to an ever-widening audience. Major tours throughout Asia, Europe, North America, and Ukraine, along with performances for heads of state and royalty, have placed Rusalka among the most widely recognized Ukrainian dance groups in the world.