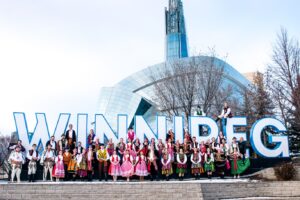 The Polish Dance Ensemble SPK ‘Iskry’ was founded in 1967 to mark the Centennial of Canadian Confederation. Iskry (meaning, “sparks”), prides itself on preserving Polish culture and ethnic tradition through song and dance.

One of the ensemble’s distinctive characteristics is its diverse, richly coloured, handcrafted costumes, imported from Poland or carefully replicated in Winnipeg.

Every summer, the ensemble performs for thousands of people visiting the Warsaw Poland Pavilion during Folklorama. Some highlights of Iskry’s performances include entertaining audiences at the 1993, 1996 and 1999 Worlds Festivals of Polish Dance and Song in Rzeszow, Poland. In the summer of 1999, members of the ensemble had the privilege of attending a private audience with His Holiness, Pope John Paul II, in Vatican City.

For over 50 years, Iskry has entertained audiences across Canada, the United States of America, and Europe.