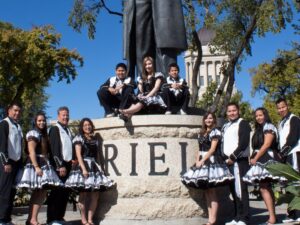 The Asham Stompers’ goal is to help re-capture and preserve the history of the Métis people through traditional dancing of jigs, reels, and square dancing. They like to have fun and enjoy the richness of the Métis tradition through the Red River Jig combined with square dancing. Group members are half Métis and half First Nations. They are also the featured attraction at the Métis Pavilion at Folklorama.

Their purpose is to help bring hope to children in Aboriginal Communities by taking something right out of the community (The Fiddle and Jig) to the world stage successfully and independently. The Fiddle and Red River Jig have a long history in our communities and the rest of the world is embracing it. The Stompers receive standing ovations wherever they perform, which is a true testament to the culture passed down by their ancestors.

Did you know…The Red River Jig was developed in the late 1700s by the first Métis colony which was at the junction of the Red & Assiniboine rivers (now known as The Forks in the City of Winnipeg) to attract fur traders into the colony to trade furs.