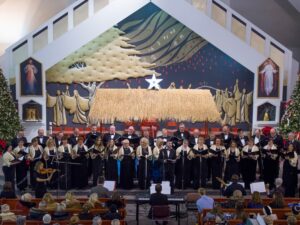 The Ensemble consists of a group of sixty singers, dancers, and musicians dedicated to the promotion of Polish culture through song and dance. The repertoire of the Choir is extensive and ever expanding. The choir recreates traditional Polish folk songs, and has performed many concerts composed of sacred music, patriotic songs, as well as traditional Christmas selections.

The Ensemble has expanded its repertoire into the realm of opera and operettas, which has included performing selections from classics such as Moniuszko’s Straszny Dwor and Halka.

Folk costumes are also an integral part of their performance. Their wardrobe consists of almost a dozen different regional costumes, each displaying the richness and diversity of Polish traditional dress.

The Ensemble has enjoyed performing in a wide variety of venues. This has included full length stage productions, choral and dance festivals, as well as church concerts.

Singers and dancers of the Polish Sokol Folk Ensemble and the Polish Sokol School of Dance give visitors one of the best examples of ethnic culture and tradition seen in this city in recent years.