Breaking Down Barriers: Phoebe Man and her Taiko Journey 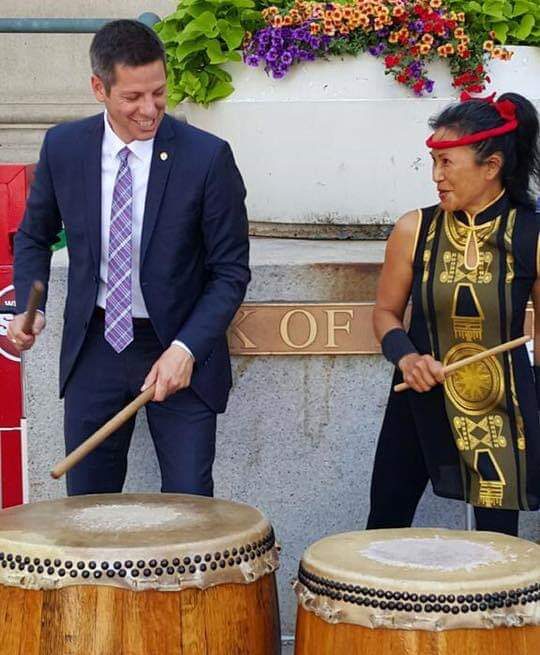 As a child, Phoebe Man distinctly recalls her inexplicable yearning to play the drums. But her calling was stifled because of her gender. When she asked her mother if she could learn her parents rejected the idea, as they believed drumming to be something only boys did.

Phoebe immigrated to Canada from Hong Kong with her family in 1974. Years later and pregnant with her second child, a chance encounter led Phoebe to a Taiko (traditional Japanese drumming) workshop. It was at this workshop that her passion really took root, and in 1989 her Taiko journey began. Phoebe’s career has continued to evolve over the years, her fervor and determination the driving force behind her success.

“In many ways, I think of my career as having been successful against all odds. While pursuing my professional career as an artist, I overcame limiting cultural beliefs regarding drumming and gender norms. I rehearsed regularly while pregnant, and I raised two successful children as a single parent.”

Phoebe first joined the Winnipeg group Hinode Taiko, where she performed at a variety of different venues across the city, including at the Folklorama Festival. In 1995, she co-founded Fubuki Daiko and toured extensively until she left the group in 2000. Shortly after leaving, her ambition led her to pursue a solo career, where she was free to create her own songs and develop her own style of drumming and singing.

Phoebe’s creative artistic pursuits expanded and she explored different mediums of self-expression including theatre, puppetry and dance. This phase of her career brought Phoebe too many wonderful places and presented her with the opportunity to collaborate with diverse musicians and artists from around the world. In addition to performing, she has spent over two decades as a Taiko educator, teaching in schools, for various groups and organizations and to the general public.

“She is considered as a pioneer in expanding the arts vocabulary of Manitoba and has brought the art of Taiko into a broader artistic realm” – Brian Richardson, colleague/actor/musician/writer

Living in a single income household, Phoebe relied on every single gig, big or small, to sustain a living for the whole family. She attributes great blessings and the support of Folklorama as the reason why work always seemed to come her way.

“Folklorama represents diversity, something I very much cherish in my life. It also provides me many job opportunities for which I am so thankful, but more importantly its staff offers great support and assistance, which gives me the feeling of being appreciated… something all artists dream of. Working with Christian Hidalgo-Mazzei and Wynne Au is truly wonderful because they genuinely care.”

To Phoebe, sharing her culture with broad audiences is all about expansion: expansion of knowledge, understanding, interest and respect. Sharing her musical talents through playing the drums, a universal instrument, allows for the chance to transcend cultural divides and unite in shared human experiences, celebrate diversity of life, traditions and beliefs, and overcome barriers – something this incredibly talented woman has been doing her entire life.