Power of the Pow Wow 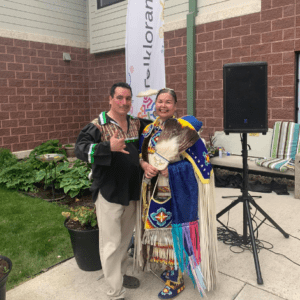 If you’ve ever attended a Pow Wow, then you’ve heard the chanting and steady drumbeat that complement the cultural dances. Behind each chant and beat of the drum, is a story or prayer that holds great meaning, beyond being music for dancers.

Ray “Coco” Stevenson is a well-known Indigenous singer and drummer from Manitoba. He was first introduced to drumming and ceremonies over thirty years ago. His journey as an Indigenous artist started after that first introduction.

For Stevenson, performing and sharing his gift has been more than just the music industry – drumming has helped keep him on the right path.

“Some of the healing benefits for drumming and singing is letting all of that negativity out,” states Stevenson. “It means so much more to me and it has helped me throughout my journey to stay on the Red road.”

Stevenson became involved with Folklorama as a performer with an Indigenous group over twenty years ago. After that, he formed his well-known group: Walkingwolf Singers & Dancers. Stevenson has also held the role of Entertainment Coordinator at the First Nations Pavilion AMC.

To this day, Ray “Coco” Stevenson remains a member of Folklorama and often gives educational performances through the Folklorama at Home and Folklorama at School programs. One of his favourite aspects of these performances is teaching people a little more about Indigenous people and culture in Winnipeg.

A critical part of the educational performances, through Pow Wow or speaking, is the sharing of history.

“We’ve dealt with many obstacles for generations and people need to know that history,” states Stevenson.

In June, Canadians celebrate National Indigenous History Month and Indigenous Peoples Day on the 21st. For Stevenson, the best way to honour and celebrate during this time is for all Canadians and people around the world to learn the past of the Indigenous peoples.

Help support and celebrate local Indigenous artists and performers, like Ray “Coco” Stevenson, by listening and amplifying their voices by sharing their stories.

If you would like to join the Folklorama family as a member, contact Katie Green at kgreen@folklorama.ca