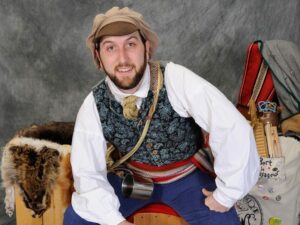 Rob Malo, also known as TiBert le Voyageur is a Franco-Manitoban Métis storyteller, author, stage performer, juggler, poet, and community builder who shares his passion for history and culture with people of all ages.

He was the Storyteller in Residence at the University of Manitoba and is recognized by Storytellers of Canada as a Master Storyteller. Rob draws on his background as an Educational Programs Developer at the Manitoba Museum and as a Professor in the Tourism Department of l’Université de St. Boniface to delight audiences through storytelling, music, and song.

TiBert le Voyageur is at once a historically-based character, a living role model, and a cartoon hero; he simultaneously captures the imagination of spectators of all ages. An engaging mixture of juggling, storytelling, improvisation, humour, interactive plays, sing-along songs, historical musical instruments, traditional costuming and props, beatboxing, in either or both Canadian official languages describes a TiBert show.

The audience is engaged in a shared experience from which a common Canadian identity is created and cherished for a lifetime. Malo has been a part of the Folklorama family for over 10 years.