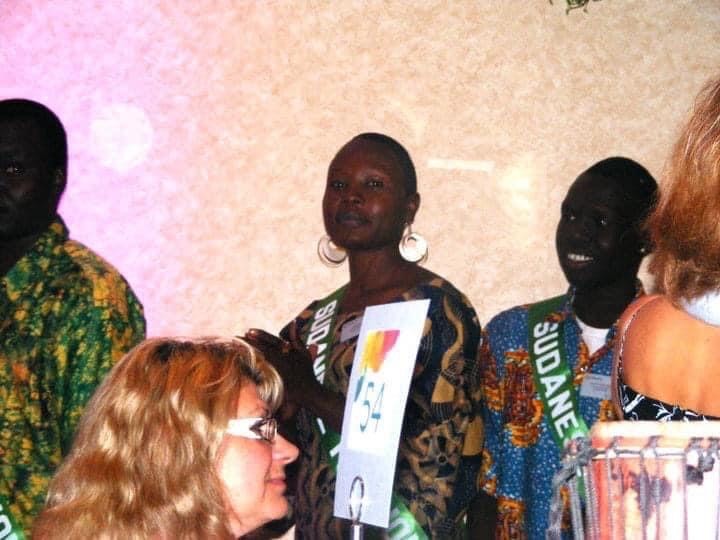 When Sandy Deng first arrived in Winnipeg in 2000, a friend invited her to the Africa Pavilion during Folklorama. She visited the cultural display, bought African clothing, and marveled at seeing so many Africans proudly displaying their culture.

“I was really happy that I got to see many people who looked like me”, states Deng. “I had been in Canada for only 5 months at that time and I felt at home at the African Pavilion. I came to understand that the event was run by volunteers and I asked how I can get involved.”

Over the years, Deng has held various volunteer roles in the evolving community; she started as a dancer with the Sudanese Pavilion when it became independent in 2008 and assisted with setting up and cleaning before and after show times. In 2010, Deng was selected to represent the Sudanese Pavilion as an Adult Ambassador. She continued to dance with the Dinka Malual group until 2011, when they became the South Sudanese Pavilion. Her oldest daughter has followed in her footsteps and became a dancer at the pavilion and hosts the shows as MC.

She has garnered many fond Folklorama memories over the years, but one in particular stands out – and perfectly speaks to her ambitious character.

“Foklorama 2013, I just had a baby in June and participated as dancer with Dinka Malual Group. I danced three shows a night for 7 days. By the time I would go home at night, my body would ache but then would get back on the dance floor the following evening. It was exhausting but I lost the baby weight, so I was happy with that.”

In 2019, Deng was approached by community leaders and asked to coordinate the South Sudanese Pavilion – she agreed wholeheartedly. South Sudan is the youngest nation in the world and is made up of sixty-four tribes that speak more than five hundred linguistic partitions.

“My favourite thing (about the pavilion) is our unique traditional cultural dances and the pride we have in our uniqueness as a people.”

Sandy Deng, winner of the 2019 Al Malbranck Memorial Outstanding Volunteer Award, and Margaret Yanga worked together to organize and manage the pavilion during Folklorama’s 50th in 2019 – no small feat. Deng’s passion for her community lends itself to her drive and commitment to promoting and preserving her culture year-round and during Black History Month.

“It is important to celebrate our South Sudanese culture during Black History month to share our culture with other black communities and the mainstream society as well. It is also important that our children who are born in Canada get to learn about where they came from and to have pride and love for themselves”, states Deng. “When people learn about each other’s history and culture, it will help create a society that is more accepting of people from different cultural backgrounds. The more the mainstream culture is exposed to other cultures, the more these new cultures can be incorporated into the evolving Canadian cultural fabric and down the road, we as a society can eliminate racism and discrimination based on ones heritage or cultural background.”

Deng was supposed to coordinate the pavilion again in 2020 but that unfortunately did not happen due to the cancellation of the festival.