Rhythms of Brazil in Canada 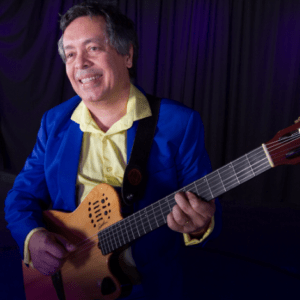 Marco Castillo was raised in a musical environment; his music education began before he ever touched an instrument. His father, a professional musician, toured the world and produced records, often making a variety of music at home. Even though Castillo was young at the time, he can still hear whole recordings in his head. His mother never picked up any instruments, but she was connected to the arts as an educator.

“We learn by listening and when you have an instrument, you just start playing if you’re musically inclined,” states Castillo. “Everyone is exposed to music in some way.”

Castillo spent most of his life in the Samba capital of the world, Rio de Janeiro, Brazil but he experienced different cultures from moving around a lot. He first picked up a guitar at the age of 12 when his family was living in Guatemala – and he was hooked.

Marco Castillo is musically open-minded. He plays Brazilian rhythms, jazz, percussion, and funk music. Most recently, he has been working on remixing an original piece in techno/dance style. His flexibility and reputation for delivering a world-class show has made Castillo well-versed in performing at concert halls with artists like Kiko Freitas and at festivals, including Folklorama.

Castillo has been involved with Folklorama for over 10 years, performing at year-round events and on the pavilion stage.

“You guys give me work throughout the years,” remarks Castillo. “Not only during the festival but throughout the year you have different events and hire people and that’s wonderful to have that kind of support. All of the artists really appreciate it.”

Despite being a challenging profession at times, this Latin musician and producer’s desire for teaching and sharing Brazilian culture and music keeps him energized.

Although the pandemic has changed the landscape for performers, he has continued producing music in his home studio and has conducted virtual collaborations. Castillo is always learning; he continues to research new rhythms and sounds and he is enrolled in Professional Development courses with Jovino Santos Neto, a virtuoso Brazilian musician living in Seattle. Neto played with legendary Hermeto Pascoal for 15 years, one of Castillo’s inspirations.

Marco Castillo will be hosting a free Folklorama at Home: The Virtual Experience workshop on March 12, 2021, made possible by the Safe at Home Manitoba grant program. His workshop is an introduction to the origins of Carnaval and, of course, his music and rhythms.

“I expect that people will get engaged and involved and dance at home! That’s the idea!”

Bring Folklorama to your home, work, school, or play and help preserve culture for generations to come. Contact Christian at CHidalgo-Mazzei@folklorama.ca to book your Covid-safe event today.