Toe-Tappin’ Along with The German Club Band 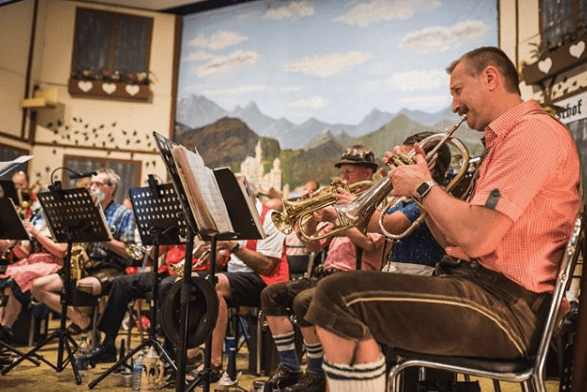 Discover the rhythmic sounds of traditional German music with The German Club Band, a group that you can always count on to deliver a fun, energetic show.

“We love Folklorama. It is a large commitment for us trying to get a 15 to 20 piece band together for seven evenings in a row. We do have a “small amount of fun”!” states Neil Allison, Band President “Musicians love to play in front of an audience. Maybe the love of music will inspire.”

The German Club Band share their talents year-round; last year the group played forty gigs inside and outside of the club. Whether they’re playing at The Forks, Victoria Beach, Gimili or active living centres, they always put on a toe-tappin’ show!

Like many performing artists, they have been feeling the effects of the pandemic, as the majority of live events have been paused or cancelled completely. The members of the band have continued to share their love of music with each other during their weekly rehearsals at the club, where they play in a large circle.

Join the German Club Band at their first performance since March at ‘Oktoberfest’ at The Beer Can on October 1st-3rd, 2020!