Our Stories
Folklorama / At Home / The Show Goes On: An Interview on Engaging Culture with KEFI

The Show Goes On: An Interview on Engaging Culture with KEFI

KEFI Greek Folk Dancers of Manitoba are based out of Winnipeg and are the province’s only Hellenic-Greek cultural dance group. This past summer, the KEFI dancers performed on boulevards, and in the backyards of Winnipeggers, bringing joy to senior living communities and connecting with their culture. We wanted to learn more about how this inspired group have been keeping their spirits and culture alive during COVID-19. We connected with Athena Dinos (Instructor, Junior & Senior) to learn more. 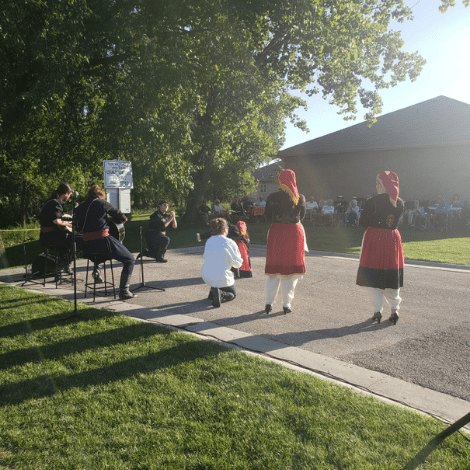 How did KEFI dancers first get involved with Folklorama? What does being a part of Folklorama mean to you?

The Greek Community has been involved with Folklorama since 1970. We were one of the original four pavilions and we have participated in the festival every year since!

During the 60’s, there was a huge influx of Greek immigrants who came to Winnipeg.  Coming to a new country from so far away was no easy task, especially in those days. The world was not connected the way it is today and many feared they would lose their ties to the old country being so far away. Connecting to their ethnic community became important not only for support, but also as a means of preserving their culture. Folklorama was one way they could share and show case their culture while ensuring its survival.

We, their children and grandchildren, have grown up as participants of the festival. Initially we attended, sitting on the sidelines watching the performance as our parents volunteered at the venue. We watched the performers in awe and longed for the day that we could be on stage performing the dances. As we grew up, we began to learn more about Greece’s history and experienced its beauty through travel. It was easy to fall in love with the country. Hence, we now find second and third generation Greek-Canadians with the same passion and love for their culture as our parents and grandparents had when they first came to Canada. We cling to Folkorama for the same reasons: it keeps us close to our heritage and it is a means of prolonging our cultural ties.

Tell us how and why the group was started!

The Greek Folk Dancers of Manitoba was established in 1974 as a means of preserving the Greek culture among the diaspora in Winnipeg. Those who have travelled to Greece know how important gathering and celebrating is for the Greeks. We celebrate for many reasons, but especially to commemorate the patron Saint of our village or neighborhood. Greece has 13 prefectures, each with a unique sound and style of dance. When the new immigrants arrived, they came from various areas around Greece and brought with them these regional experiences and cultures; regions such as Crete, Pontos and Epirus. Since our dances are community dances, formed in circles and inclusive of all, it seemed appropriate to learn about our own cultural differences just as we were learning about other cultures in a diverse city such as Winnipeg.

Today, KEFI continues to develop its repertoire of dance. With over 5,000 documented Greek dances, there is no shortfall of material to learn. Our dancers attend conferences and workshops, and invite instructors from around the world to Winnipeg to teach. Although we are mostly recognized for Zorba, there is a small and growing core group of performers who are dedicated to learning and show casing the more traditional dances of Greece, some of which date back to ancient times.

Why did KEFI dancers decide to participate in the Folklorama at Home programs this summer/fall?

Greece has a long and rich history that has directly influenced the modern world. Many people love to learn about Greece and our dancers love to show case it! Our dancers always look forward to the August festival where they can not only perform, but also meet so many new people. Covid-19, of course, resulted in the cancelation of not only the festival, but in so many other activities. The dancers were extremely disappointed so when the group was invited to participate in Folklorama at Home, it was an easy “Yes”.

Folklorama at Home provided our dancers with a unique experience. They were able to form a closed bubble who practiced and performed together, strengthening their friendship and bonds. They were also able to tour the city and meet new people, all the while getting some physical activity and enjoying some cultural engagement, both of which a lot of the group felt out of touch with for a large majority of the pandemic.

Other than the at School/at Home programs, how has your group continued to share their love for culture during the COVID-19 pandemic (with others or amongst themselves in the group)?

For a while, the group conducted practices through Zoom, however this proved to be difficult particularly when it came to the more complicated dances. Furthermore, our dances are community based; formed in lines and holding hands. Covid put a pause to that. Currently we have a very small and closed group of performers who meet to practice regularly for two upcoming virtual projects. On March 25th, 2021, Greece is celebrating 200 years of Independence from the Ottoman Empire. Originally, the community had planned a huge gala to celebrate this milestone and Kefi was to perform at that event. The gala has been cancelled but the community is still preparing a virtual celebration.

In addition, KEFI is preparing a separate project, a commemorative video for the 200th anniversary. We have nine dancers who meet twice a week in two separate venues and who adhere to the distancing and masking protocols. There were a couple of months during which we could not meet, but these were during exam period for our university students, so it worked out.  Now that things are a little better, the group is preparing their virtual presentations by filming at outdoor venues and fields.  The presentations will be shared late March and mid April, respectively. Those interested will be able to find them on YouTube and through the Greek Community website.

What are some favourite memories from the shows this past summer or from past Folklorama Festival performances?

Every dancer has their own favorite memories, of course. Most have to do with the friendships that have been formed. Many, however, would agree that Folklorama 2019 was especially memorable.  First, the Greek Pavilion celebrated their 50th year with Folklorama. That is a huge milestone! We were invited to perform at the inaugural event to commemorate this achievement.

Second, 2019 was the year the pavilion moved to the Convention Center. This was the first time the Greek Pavilion was not in the St Demetrios Church Hall. The Convention Center venue could accommodate almost three times the number of guests as our previous location. Every night, the dancers performed in front of over a thousand visitors! The experience was incredible! On the last night, the dancers took a dance onto the floor and invited guests to join the line. Hundreds joined in and the line snaked around the perimeter of the room. It was wild!

But the most memorable moment of 2019 was the engagement of our dancer/instructor Chrissoula Chouzouris to George Pries which occurred on stage at the last show. In the words of one of our dancers:

“This moment was very special for the group considering Chrissoula had been a Greek dance teacher for many years, a family member to multiple dancers, and also an integral member of the community. Some of the dancers were told before the show that the proposal would be happening; however, others, like me, missed the news and were just as surprised as the audience! The dance that the proposal occurred during was an impromptu dance called Zembekiko– the fact that all the dancers on stage were performing from their feelings rather than from strict choreography made it that much more special. The natural flow of George, who is not a member of Kefi, coming onto the stage for this dance was not out of the ordinary; it is during the Zembekiko performed on the last day that any Greek interested in showcasing their culture is permitted to perform! The moment came as a complete shock to Chrissoula as a result of George’s brilliantly developed plan! The whole Greek community combined with our amazing Folklorama audience were invited to share in this beautiful moment.” – Ilianna Hoople, Instructor (Senior). 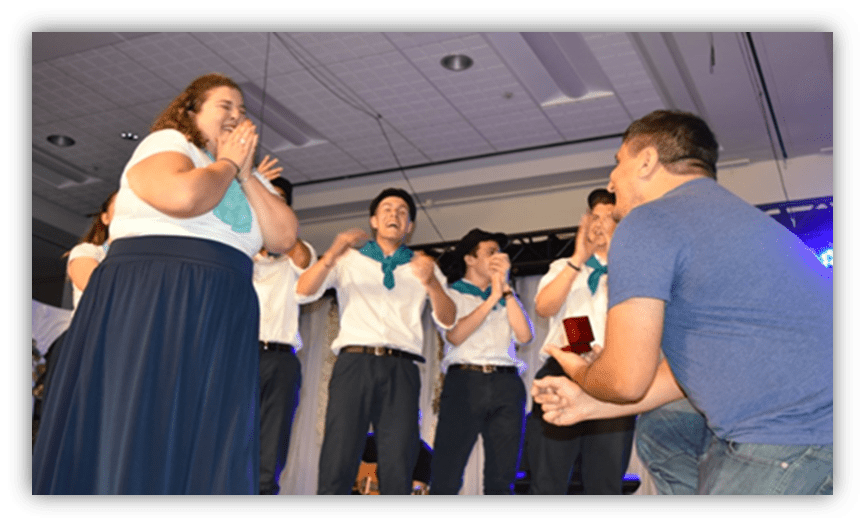