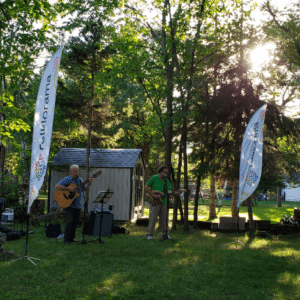 Originally, the group started off as a 5 piece bar band in the 70’s called the Coachmen. They performed contemporary pieces as well as folk and Celtic (now, classic rock and country). In those days, the government required establishments to have live music if alcohol was served. A boon for musicians. Today that is not the case. Live music and income is not as common as it once was.

Over the years, a few musicians came and went but the core of Dan Figsby, Bob Fleury, and Chris Gillies were together until almost today (Chris left the group in 2008). The band joined what was then the Folk Arts Council of Winnipeg in the late 80’s and have continued as their membership with Folklorama ever since.

“Joining the Folk Arts was a logical step, because the group was performing more and more Irish, Scottish and British material,” states Dan Figsby. “Through the Folk Arts (as well as on our own) we were able to perform for conventions, fairs, Red River Ex, St. Patrick’s Day, Casinos, nationally and internationally, as well as many private functions. Through these performances, thanks to Chris  Hidalgo-Mazzei, we met  many fellow members. A most enjoyable experience and brings back lots of good memories.”

One of the Barley Mow Band’s performance highlight was the Folklorama United States Tour in 2010, where a number of groups performed across 6 cities in the midewest over a 10 day period, complete with a P.A. System and the Folklorama Llama.

“Folklorama presents the opportunity for an audience to experience several cultural delights at one sitting. Let us hope and pray and do the work that we can all continue to perform that message to audiences for years to come.”

Now, and over the years, Dan Figsby has been performing as a solo artist, and sometimes with Bob Fleury. He also plays with a few other talented musicians who feature Celtic and down east folk music. As well, Dan has been setting up and monitoring PA systems for live and recording sessions, digital art, photography, and layout design just to keep busy. For love of performing.

“As one practices his or her art, hopefully one gets better. I know I have. Even though many songs are performed as “standards” for the group, you try to bring a fresh feel to each performance,” States Figsby. “You know you have succeeded when you hear the laughter, the applause or they start throwing things. Did I mention we do a fair number of jokes and attempts at humour…….people seem to enjoy it.”