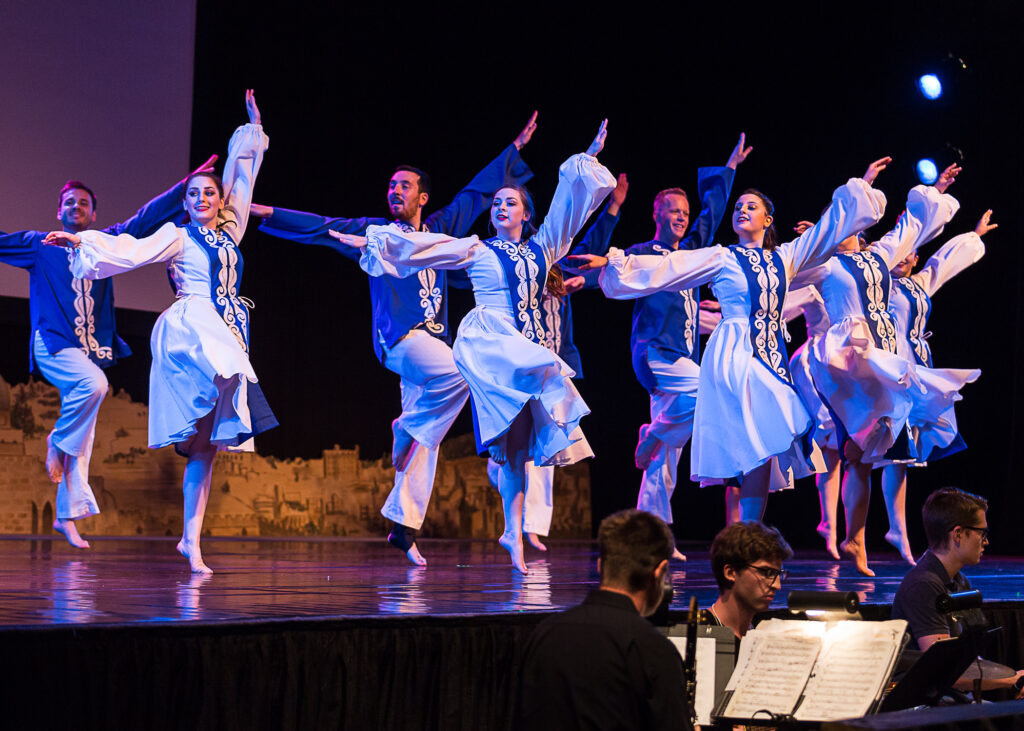 In the early 1960’s, Sarah Sommer was involved in youth activities throughout the city of Winnipeg, including Israeli folk dance. Celebrating culture through dance inspired her, and she became determined to form her own dance group. In 1964, the Chai Folk Ensemble was established with eight girls from the community, aged twelve to fourteen. The group practiced in the Sommer basement to the accompaniment of music from a record player.

Over the last fifty years, Chai has grown to encompass over thirty performers, adding live music with a full band and a complement of singers. Today, they are the only Israeli folk dance group in North America to perform exclusively to live musical accompaniment.

Chai educates communities on Jewish culture and tradition around the world through the creation of Jewish and Israeli music and dance, including at the Israel Pavilion – Shalom Square during the Folklorama Festival.

“Performing at Folklorama is a meaningful tradition for our organization. It is a chance to give back to the community that has supported us, while representing the best parts of Israeli and Jewish cultures. It is an honour to perform for the diverse audience who come to the Israel Pavilion every year specifically to celebrate the joy of multiculturalism through music and dance. Chai is honoured to represent the many parts of the globe impacted by Jewish and Israeli folk arts,” said David Vamos, Artistic Director of the group.

Some of Chai’s most cherished experiences have included partnering with folk groups from other cultures, which has occurred several times during their history with Folklorama. In 2012, a large group of dancers from Mexico City, Anachnu Ve’atem, performed with Chai for a week of mesmerizing shows. Just last summer, after a major hit tour to Israel and Ukraine with Rusalka Ukrainian Dance Ensemble, the two companies joined forces on stage at the Israel Pavilion for several energetic shows.

Although all live performances have been postponed or cancelled due to COVID-19, Chai has not slowed down. They are currently releasing sneak previews of songs from their upcoming sixth studio album and have been producing virtual projects to share across social media, releasing both beautiful music and dance pieces. These videos can be found on the group’s social media accounts.

Chai is always looking for trained dancers, singers, and instrumentalists who want to audition for the group, as well as passionate volunteers who want to get involved in the organization by sitting on their board, costume department or sub committees. Anyone interested can call the Chai office at 204-477-7497 or by email at info@chai.ca.