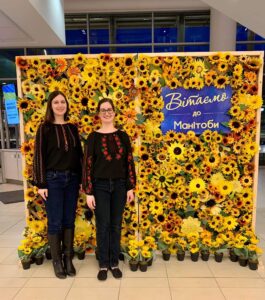 When you visit a Folklorama Pavilion, you taste the amazing cuisine, you feel the energy of the entertainment, and you experience the spirit of the people, but what you might not realize is that there is more behind the doors. For the Ukraine-Kyiv Pavilion, taking part in Folklorama is only a portion of what they do year-round. Especially with the crisis in Ukraine, they are needed more than ever.

The UCC-MPC currently has two established branches in Winnipeg and Dauphin and is actively working with other centers in rural Manitoba such as Brandon and Morden/Winkler. The Winnipeg branch is comprised of 19 member organizations and their affiliates, each one with its own volunteer base and undertaking its own activities and fundraising. These myriad organizations, however, often look to the UCC-MPC to provide overall coordination to assist with volunteer coordination, the provision of information, and facilitation of access to existing funding sources and often to raise specific issues with the government.

Additionally, the UCC-MPC undertakes programming that is overarching in content and brings together members of the entire community. For example, the Kyiv Pavilion during Winnipeg’s annual Folklorama multicultural Festival, the commemoration of Ukrainian Independence Day, Holodomor observances, and so on. To undertake these activities, they have established several standing committees: Folklorama, Immigration, Holodomor, Euromaidan, Bulava Award, Ukrainian Day committees, and shorter ad-hoc committees for special projects such as the Shevchenko 200 committee, the 125 of Ukrainian Settlement anniversary committee or the Manitoba 150 committee. It should be noted that the UCC and its myriad activities are run entirely by its team of hundreds of tireless volunteers.

The UCC-MPC is often called upon to respond to issues affecting our community by local media outlets and to represent the community before the City of Winnipeg, the Government of Manitoba, or in an advisory capacity with federal MPs in Manitoba.

Since the outbreak of the war in Ukraine on February 24th of this year and the subsequent displacement of millions of Ukrainians, the UCC-MPC and its member organizations have contributed significantly to the joint UCC-Ukrainian Canadian Foundation Humanitarian Aid Fund. In recent weeks, they have also begun focussing on fundraising efforts to address the immigration and settlement needs of those displaced persons arriving in Manitoba. The Ukrainian community and, indeed, Manitobans at large, have responded very generously to this need.

The Manitoba government has not only committed $800,000 to the UCC-UCF Humanitarian Aid Fund but has stepped forward to absorb many settlement costs for newcomers from Ukraine. This includes initial housing for many Ukrainian newcomers without links to family or friends in Manitoba, the streamlining and provision of settlement services, health care, and up to six months of income benefits on a case-by-case basis to those in need.

Numerous individuals, businesses, ethnic, and not-for-profit organizations have come forward with donations big and small. Concerts, banquets, socials, pyrohy (perogy), and craft sales have been organized to raise funds. People have collected and donated furniture and household goods, bedding, and much more. The generosity has been so incredible that they had to temporarily halt the acceptance of clothing until they have more space to store it. Donations from children who decided to turn in their allowance or the proceeds from the sale of bracelets or pins to help the less fortunate have been inspiring. The funds received are being used to provide immediate needs such as essential toiletries, bus tickets, food parcels, backpacks, and school supplies for children, as well as stuffed animals and diapers for the very young.

On May 23rd, Winnipeg welcomed the first of Canadian charter flights with approximately 350 displaced people from Ukraine, and more are on their way.

If you would like to help, they are looking for the following:

The need is great, and they truly hope that Manitobans will continue to display their friendliness and generosity with their assistance and donations in the months to come.

Дякую to the Ukrainian Canadian Congress of Manitoba and all they do.