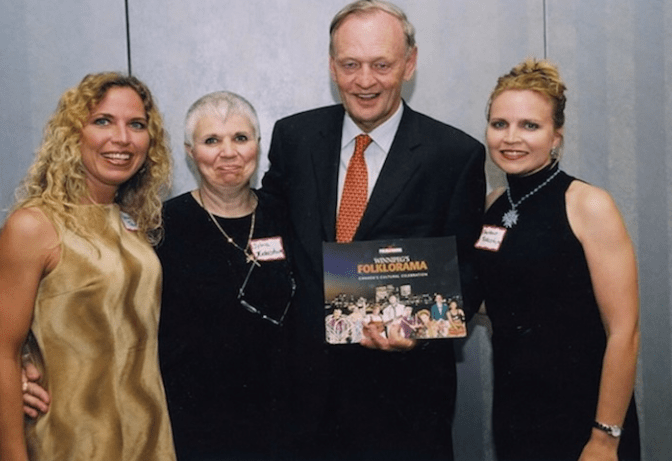 Rosemarie and Charlene Todaschuk were born and raised in Winnipeg as fourth and fifth generation Ukrainians. Their parents and ancestors have been their biggest influence and inspiration. When their forefathers immigrated to Canada, they brought with them trunks full of beautiful traditional attire made of pure linen and wool woven by hand, coral beads from the Black Sea, garden seeds, holy pictures stowed safely between pillows and blankets, a Bible, family heirlooms, artifacts, and of course, memories. As children, it was the trunks full of treasure that sparked their curiosity and became the main motivation for cultural exploration.

The Todaschuk Sisters hail from a family of musicians accustomed to performing. From the ages of 4 and 5, they started taking piano lessons, ballet, Ukrainian dancing, mandolin lessons, and drama at the Manitoba Theatre Centre. They began performing at church celebrations and were pre-teens when they performed at The Gardenton Ukrainian Festival in Manitoba.

Whether they are singing, playing the tsymbaly, or dancing, the two sisters enjoy opportunities to perform and share their love of music and culture. They have entertained audiences throughout North America and Ukraine; from the Bicentennial Celebrations in Los Angeles to PNE in Vancouver; from the Pysanka Festival in Vegreville to Canada’s National Ukrainian Festival in Dauphin, and festivals in Toronto, Montreal, Ottawa and New York. They have toured twice in Ukraine, and performed closer to home at the Pan American Games and Winnipeg’s Folklorama.

“Folklorama has been part of the Todaschuk family since its inception. The Folklorama family is our family. Whether we have been volunteering at the Ukraine-Kyiv Pavilion as children modeling costumes, dancing as teens, singing and emceeing shows until the present, serving special guests at our pavilion, or going on tour to other parts of Canada and the United States with other ethnic groups through Folklorama to promote our multi-cultural Festival, we have made strong friendships with so many people of various cultural backgrounds as a result of our associations with the Folklorama family!”

The Todaschuk Sisters continue to bolster the preservation and promotion of the Ukrainian culture and introduce the non-Ukrainian community to the treasures of the Ukrainian musical heritage of their ancestors. They have four internationally distributed recording albums, three of which include traditional, contemporary and original Ukrainian songs, and one is a treasured Christmas album. Charlene, a visual artist living in Montreal, had her debut Art Exhibit during Winnipeg’s Folklorama with many exhibits since, the most recently at the Pysanka Festival in Alberta and the Entropy Exhibit in Montreal. Rosemarie, who released a Jazz CD to much acclaim, sings at the annual Jazz Festival and Leo Mol Sculpture Gardens.

“We can travel the world and are greeted in celebration by the music of the people where it occupies an important social and cultural function in their societies.  No civilization on earth exists without music.  And there is no better way to celebrate life than by singing through our souls with the freedom of expressing human experiences of love, sorrow and hope.”