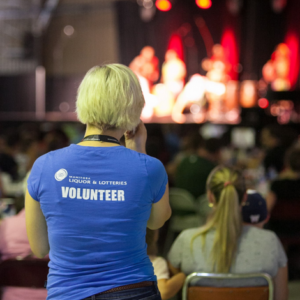 Manitoba Liquor & Lotteries is a Crown corporation that operates throughout the province and focuses on enriching the lives of people, communities, and businesses. Their profits go to the Province of Manitoba’s general revenue and support priority programming in areas like health care, education, social, and community services.

Manitoba Liquor & Lotteries first became involved with Folklorama to support and enhance the Festival by helping Pavilions source unique cultural beverages from across the globe. Fast forward 24 years and Manitoba Liquor & Lotteries not only continues to support through cultural beverage procurement but also provides additional volunteers when requested, and have been a sponsor of the entertainment at the different Pavilions. They even were the presenting sponsor at last year’s Folklorama – One Multicultural Fusion Event. One Virtual Experience.

“Folklorama is the world’s largest and longest-running multicultural festival that draws thousands of Manitobans and visitors alike to celebrate our province’s greatest strength and the festival’s foundation – its cultural diversity,” says Manny Atwal, President & CEO, Manitoba Liquor & Lotteries. “It’s this foundation along with our shared values of equity and inclusion, and our commitment to volunteerism and community that makes Manitoba Liquor & Lotteries proud to be a long-time supporter of Folklorama. Now, after being apart for so long, it is more important than ever for this iconic festival to welcome us back to share in food, music and entertainment from cultures around the world right here in Winnipeg. Manitoba Liquor & Lotteries congratulates Folklorama organizers and thanks all the dedicated volunteers who are working hard to make this year’s festival better than ever.”