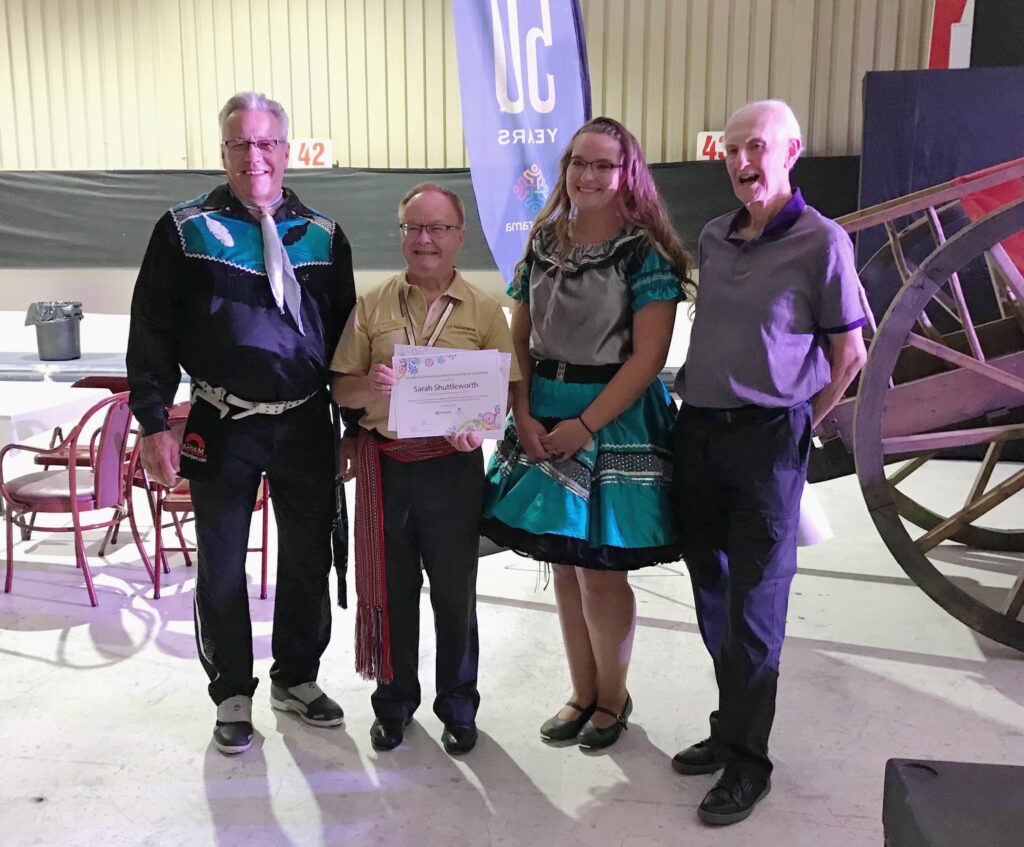 A few years ago, a grade twelve Metis student was searching for potential post-secondary scholarships to apply for. Originally from Dauphin, Manitoba, she was hoping for assistance with the living expenses and residence fees that coincide with relocating to a new city to further your education. After having the application forwarded to her, she applied for the Mark & Dorothy Danzker Scholarship for Excellence, but did not receive it.

Since 2002, in cohesion with the Jewish Foundation of Manitoba, Folklorama has presented the Mark & Dorothy Danzker Scholarship for Excellence, an annual award of distinction for ethno-cultural preservation.

In 2019, now living in Winnipeg and in her second year of post-secondary education at the University of Manitoba, the same young woman reapplied, feeling she was a candidate who strongly aligned with the scholarship’s criteria.

The word volunteer is synonymous with hardworking, dedicated, passionate, and selfless – all characteristics that Sarah Shuttleworth embodies, making her the successful candidate of the Mark & Dorothy Danzker Scholarship for Excellence in 2019.

Sarah is currently studying Psychology, and has been involved in sharing her culture through the arts for years; she has been a Ukrainian dancer for 13, and a Metis jigger/square dancer for an even longer stretch of time – an impressive 15 years! Sarah is also a member of the Asham Stompers, a prominent dance group determined to re-capture and preserve the history of the Metis people through traditional dancing, with a goal of bringing hope to the children of Aboriginal Communities by taking a piece of their community to the world stage.

When Sarah is not studying or celebrating her culture through dance, you can find her volunteering at various community organizations such as the community food bank, Reduce Impaired Driving Everywhere (R.I.D.E) Program, and the Dauphin Friendship Centre.

Despite her youthful age and growing up over 3 hours away from Winnipeg, Sarah has been volunteering at the Folklorama Festival for a number of years. Her debut in the Festival took place when she was in middle school, when her Ukrainian dance group was asked to perform at a pavilion. Then, in 2018, when the Asham Stompers decided to host the Metis Pavilion, Sarah became a well-versed performer. She now volunteers her time dancing in three shows a night for the entire week.

“Because I am a performer at Folklorama, I always look forward to performing for the audiences at the Metis Pavilion each night. The overall experience is unbelievable, and each show makes me proud to be Metis”.

Sarah is a deserving recipient of the scholarship; her cultural pride and sincere dedication to giving back to the community, tied in with her academic achievements, reflect so well the characteristics of those who the scholarship honours.

“When I received the news that I had won the Mark & Dorothy Danzker Scholarship for Excellence, I was extremely grateful. Cultural preservation has always had a special place in my heart, so receiving such a remarkable award named after exceptional people left me feeling honoured.”

Sarah has big plans for her undoubtedly bright future; after she obtains her Bachelor of Arts degree in Psychology, she hopes to attend law school, as she aspires to become a successful lawyer in her home community. She strives to continue with her involvement in the community and sharing her cultures through dance and working closely with youth.