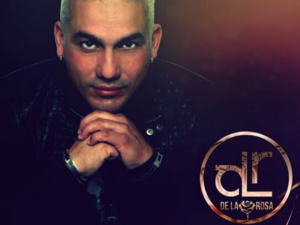 Yoslai De La Rosa was born on August 8th, 1981 in Matanzas, Cuba with music in his veins. Hot Latin dance moves and a never-ending source of energy De La Rosa has been entertaining Cuban and Latin Music Lovers since 1999.

Over the years he has toured all over Cuba performing in festivals, public events, resorts, and outdoor concerts for audiences of over 20,000 fans.

With his unique style, De La Rosa creates a fusion mix of Cuban & Caribbean rhythms. Playing everything from Salsa, Merengue, Bachata, Reggaeton & Dance. His fan base has grown from local Cubans to worldwide. In 2009, he ventured out of Cuba and settled in Canada.

In October 2010, he released his first solo Canadian album, Guarachando A Lo Cubano which was followed by a release party in Winnipeg, Manitoba. Over 1,000 Canadian fans turned out to support. The album is a fusion of salsa with a fresh, modern take to it. The album was produced by Bayron Ramos (2 time Latin Grammy nominee) of BMB Bros Studios in Miami, Florida.

Having received great reviews on his album, where two of his songs hit the top 10 Salsa Charts in both Germany and the UK, 2011 was one of his busiest years yet. In 2011, he performed all over Manitoba at venues such as Club Regent Casino, The Republic, X-Cues Fiesta Tropical as well as festivals such as Winnipeg Jazz Festival, Canada Day Celebrations at The Lyric Theatre, The Corydon Summer Concert Series, Folklorama Kick-Off, Folklorama, Morden Corn and Apple Festival and many, many more.

With an ever-growing fan base, he continued playing at many cultural events, festivals, casinos, Winnipeg 2012 Jazz Festival, night clubs, etc. Later in the year, he began working on his new & latest album A Mi Manera.

With his Canadian fan base growing he has ventured out of Manitoba with performances Calgary and Edmonton. Continuing to play locally as well at various venues within Winnipeg as well at The40 in Brandon, Manitoba. On April 20, 2013, he released his next album A Mi Manera.

After taking a couple of years off, he began touring the most popular Latin Festivals in Canada, Folklorama Festival, Winnipeg Jazz Festival, Medicine Hat Jazz Festival, Latino (Edmonton), and also performing with artist friend Maikel Dinza at Expo Latino in Calgary, the biggest Latin Festival in Canada as he shared the stage with multiples first-class acts like Olga Tañon.

Yoslai De La Rosa is now working on a new album with top talent musicians from Cuba soon to be released.