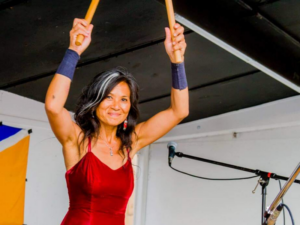 Hailing from Hong Kong, Phoebe has been playing taiko (Japanese drumming) since 1989.  A founding member of taiko group Fubuki Daiko, world-music ensembles SAND, and Just Drummin’, she is considered to be a pioneer in expanding the arts vocabulary of Manitoba.

A passionate percussion enthusiast, singer/chanter, and taiko educator, Phoebe is a sought-after performer for ceremonies and events in the Chinese, Japanese, as well as First Nations communities in Manitoba and British Columbia.