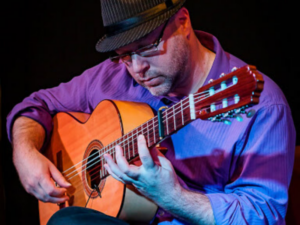 Philippe Meunier is a Winnipeg based Flamenco Guitarist who performs for theatres, cabaret in restaurant and clubs, festivals and corporate events.

In 2016, he was awarded three grants by the Canada Council for the Arts, the Manitoba Arts Council & the Winnipeg Arts Council to pursue his study of Flamenco in Spain. Whether solo or with flamenco dancers, Philippe keeps the audience engaged in this passionate, lively, percussive, and seductive art form which appears on the UNESCO’s list of Intangible Cultural Heritage of Humanity.