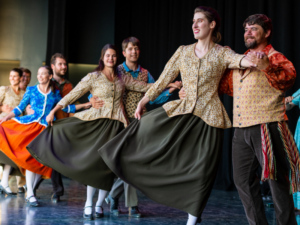 EFRR was founded in Winnipeg in 1947. At that time, the group was called “LesGais Manitobains” and was formed to promote and preserve French-Canadian culture.

The EFRR now includes an adult group and a troupe of young people – Le Troupe Jeunesse – who offer shows everywhere in Manitoba and across Canada. The ensemble has also represented Canada at various international festivals in France, United States of America, Turkey, Madagascar, Indonesia, and Mexico.

The adult group of the Red River Folk Ensemble is composed of artists passionate about music and French-Canadian dance. It presents shows with a mix of music, song and traditional French-Canadian style.  The ensemble also creates choreographies and original musical arrangements with a more contemporary flavor.

The group participates at several activities and festivals such as Festival du Voyageur and Folklorama, both internationally recognized festivals located in Manitoba.