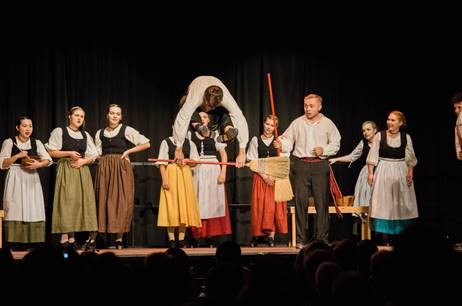 La troupe jeunesse de l’Ensemble folklorique de la Rivière-Rouge is made up of passionate young artists who want to share their French-Canadian and Métis culture through music and dance. These young people recognize the importance of keeping their traditions alive at home and abroad. They offer energy-filled shows that will have your feet tapping and your hands clapping from the moment they step on the stage.

Since this group of young people began performing together in 2011, they have participated in several shows and have been featured performers at the Festival du Voyageur and Folklorama. They have also performed with/alongside/in collaboration with The Winnipeg Symphony Orchestra, Oh My Darling, Zogma, Sierra Noble, Ray St. Germain, and more. They have also represented Canada – French Canadian and Métis culture at numerous International Folklore Festival including festivals in Indonesia, Mexico, USA, France, Dubai and more. They also have performed for the Canada Games in collaboration with Sierra Noble and the Asham Stompers.