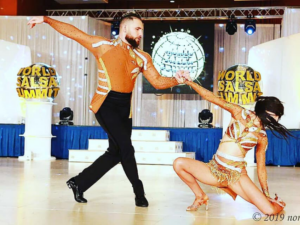 Regan Hirose and Harold Rancano are a Latin dance couple best known for their energetic and acrobatic flair on stage. Based out of Winnipeg, Canada, the flavorful couple has achieved plenty of success on both a national and international level, most notably being 9 time World Bachata Cabaret Champions.

The duo founded RHR Latin Dance Company, now known as Dance World, and have been directing since 2012 where they train and coach their teams and students, some of which have become World Champions themselves. They also coach and mentor various teams around the world, Japan, USA and Mexico to name a few, by both teaching and creating choreography.

While also running the dance school in Winnipeg, the duo also performs and teaches around the world to share their vast knowledge of styles and various Latin rhythms such as; Salsa on 1, Salsa on 2, Bachata, Pachanga, Cuban Salsa, Cha cha cha and Lifts & Tricks. Whether it’s privates, group classes or to coach teams, the couple has the experience to adapt to any teaching environment.