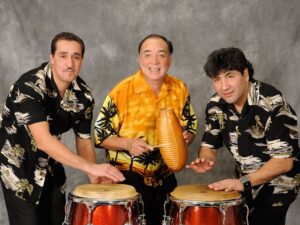 Descarga Latina is a Winnipeg-based Latin dance band that brings together three of the city’s seasoned Latin American musicians to create a fresh blend of live percussion, vocals and great orchestration through the use of a sequencer. Marcelo Ulloa (vocals), Gerardo Muñoz (timbales) and Jaime Briones (congas) give energetic Latin performances that focus on the most popular Latin rhythms such as Cumbia, Merengue and Salsa.

Whether you want some romantic ballads for dinner music or you want to have a dance party, Descarga Latina is the band for you.