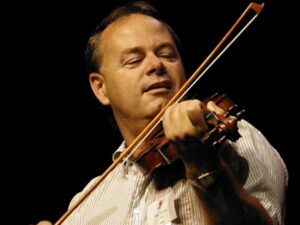 As a lifelong fiddler, Denis Encontre is a dynamic musician who has had the honour of playing for her majesty, Queen Elizabeth II, on her royal visit to Canada in October 1984. With two solo albums, Funtyme Fiddling & Denis Encontre Fiddling, his music can be enjoyed anytime.

He has performed at many of the major Folk Festivals, including The Winnipeg Folk Festival, and has been playing for Travel Manitoba in places throughout the United States promoting Manitoba’s tourism and multicultural mosaic. He can be seen annually in Winnipeg’s Festival du Voyageur and at Pavillon canadien-français during Folklorama.