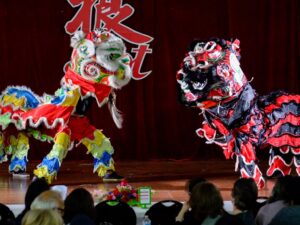 Since its inception in 1990 as a non-profit organization, the Ching Wu Athletic Association has been committed to developing and strengthening its support of authentic, time-honoured Chinese culture, restoring the reputation of Chinese martial arts while preserving the many traditional styles.

The Association is staffed by volunteers and led by three Master Instructors representing 100 years of combined training and experience in Chinese martial arts and lion dance. The Ching Wu Athletic Association provides top quality martial arts training and associated cultural activities, as set out by the original Ching Wu in 1910.

The centuries-old tradition of the lion dance is performed with accompanying percussion. A lion dance performed by Ching Wu will add colour and excitement to any important celebration – the opening of a new business, the beginning of a new year, a wedding, birthday or any event to which you wish to add some good fortune.

Ching Wu lion dance and martial arts performances are regularly featured in annual events, such as Folklorama (Chinese and Indochina Chinese Pavilions) and Canada Day celebrations in Osborne Village. In addition to performing in a variety of schools and senior centres in Winnipeg and rural Manitoba, Ching Wu has performed for special events such as the inauguration of the Honourable Philip S. Lee, C.M., O.M., Lieutenant Governor of Manitoba, in 2010 and the Pan American Games Opening Ceremony in 1999.